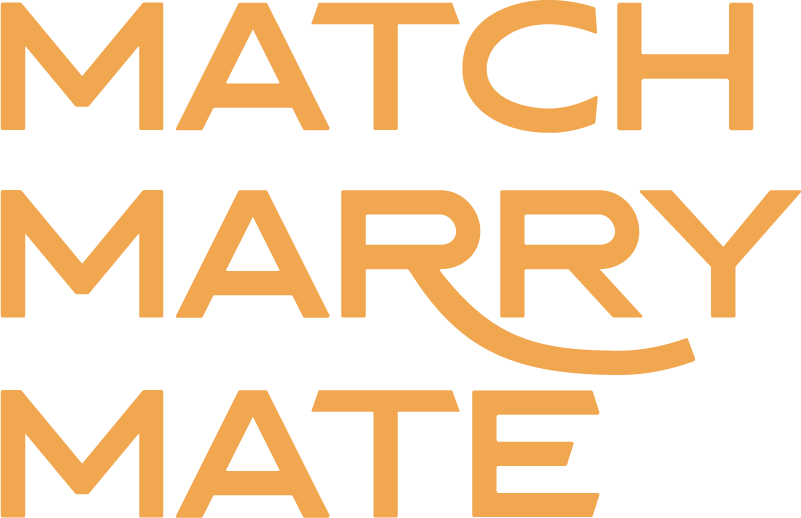 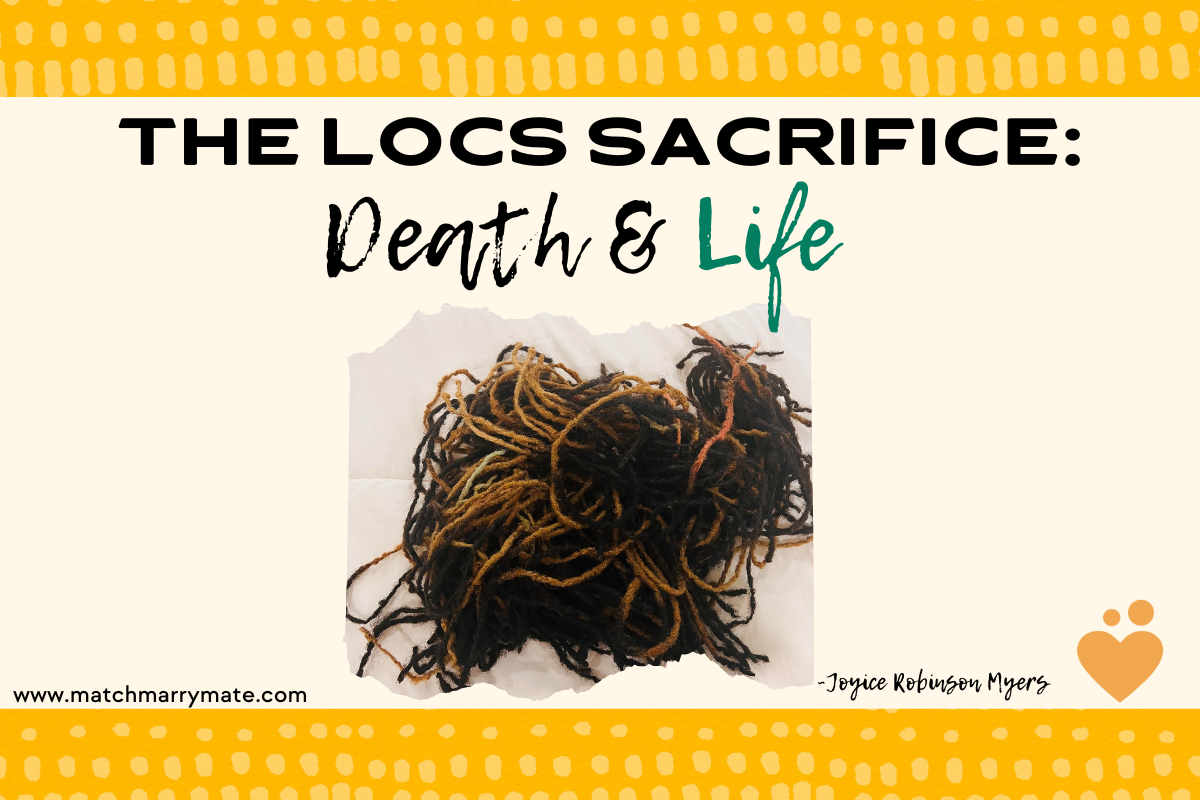 2017. Independence Day to be exact. A day from an era I refer to as my first life—my Practice Life. You know, the time of the first 33 years of living when you think you know something, but not really. Not that I know too much more now, but at least I know that I don’t.

I always knew I wanted locs, and I had planned for them much later in my life. As early as my 20s, I pictured this style well into my 50s and 60s. This worked for me because the man I just so happened to be married to then was trapped in a religion that viewed locs as less than godly and uncomely. Fight that battle when you get there, I whispered to myself and pressed on.

32. Thirty-two years young. It was a month after my 32nd birthday and I had my first vision that my father would die. Two more visions and I’d be certain of his death. That’s how it works with me. Three visions and then a real-life manifestation. Something about this vision had informed me that his death could be as soon as that same year. Another layer to this vision left me holding an eerie feeling in my body. This was not just a physical death to end his human life. It seemed it was a foreshadow of something that I did not quite have the spiritual seasoning to discern. I knew it was something, I just couldn’t decipher the message, so I held onto it and waited for more. Confronted with my inability to decode, I accepted it as the next level in my ever-developing spirituality and abilities. I was rising, but I was not there yet.

I called out, “You’ll share what this means when I’m ready for it. I’ll trust that and continue on my way.” And so I did.

Oh, and that man I mentioned earlier—we’ll call him Ecks—was leaving his old religion and converting himself into another. While it posed its issues, one upside was that this new faith allowed for locs—more so it was embraced, welcomed, and expected. Go fig! I was itching to do something new, something drastic. My birthday had just passed and it’s usually when I get that feeling. Both his religious transition and my new age combined with the processing of my father’s coming death; I decided it was time to loc.

There was a woman. I hired her to start my locs. For style and technique, she had what we’d call “gifted hands.” Though that’s not the same as Blessed Hands, and I know that now. She was also connected to Ecks in a way that I’d like to divorce myself from too. So, I shall. If you didn’t know, getting one divorce is nothing but a series of mini divorces as several separations must occur just to cope with the main one, or even because of it.

More times in a day than I can sometimes count, people ask me: How long have you had your locs? How did you start them? Who started them? Why did you do it? So many times! I actually love these questions. I adore that countless Black men and women are so proud of me or so curious of me or so in awe in the beauty of my hair that they stop me to converse about them and my process. And they are so beautiful! Told y’all, Homegirl had gifted hands. Yet, both Ecks and Homegirl are nonfactors in my life now, and it’s time to make the final cut.

As much as I’m ready to unlock this energy and release many of its memories, a few of them are hard for me—sadden me. My locs are one of my husband’s earliest compliments to me. He loves them. As such, it’s hard for me to let them go. To his credit, his relationship with me and my hair is post my Practice Life. He didn’t see what I had been through. Naturally, he only sees their beauty. But, I know the pain, the ugly, and the hell too; and I don’t want it living in my crown anymore.

The sacrifice must take place.

To give up this set for the writing process—not just to gain freedom and breakthrough but also a fresh set absent the memory of the separation, abandonment, and disgust.

On the altar they go, and the countdown begins.

5. Five summers ago, I spent two days of my life coiling my hair to begin my loc journey with new spiritual insights.

4. Four years ago, I promised myself that I would remain quiet on my divorce until all legal matters were final and I had the language to teach about it from a (mostly) pure heart. Not sure it’s ever safe to believe a human being has 100% purity, so I’ll grant myself grace here as I’ve learned to be kind and realistic with myself.

This year, the language has come marking the time to share my story.

Under a full moon on the 8th of November, with my husband’s spiritual support and physical help, we cut each loc out as an act of sacrifice. Eight—the number of consecration and new beginnings. I didn’t plan it, but the cutting fell in the same week that I filed. Wow.

New beginnings. I had grown as much as I could in these set of locs.

The next morning, I enjoyed the beautification process with a cleansing to release my Crown Chakra—the one responsible for my overall spiritual progress whilst in the body. I’ve learned how valuable it is to have a stylist who participates in my spiritual relationship with my hair.  I shared some of the backstory and my new intentions with her so she tapped into the right energy upon my head.

Hours later, and the New Me emerged with a ginger-copper curly ‘fro ready to start anew. Somewhere over the summer, my visions waned, my dreaming suspended, and while still possible, my ancestral-charged messages and downloads were much fewer. This was yet another revelation that it was time to lay the old hair down. My hair follicles are my antennas into the Cosmos to send and receive messages and it became woefully clear that I needed a new vibration and frequency.

3. Three messages. One as a dream that I perfectly recalled and catalogued in the morning. Another as a download that kept my hand busy drafting the first chapter of my memoir. The final as a vision that offered me my next clue. All three further confirmed that the locs sacrifice was not just a good decision, but  necessary, and certainly a spiritual one. That vision left me with a familiar pull. The same pull I felt when I received the first message of my father’s death. As I sensed, two more death visions throughout the summer and fall had visited me.

I had started to make my peace, ask him my final questions, and bring things to a close. I shared with my brother, and did my best to guide him. It’s not my way to place the burden on a child’s position to make right on parental harm. I believe that’s the work of a parent. But, I did encourage him to make his own peace too as the survivors of death have to live with its finality in ways the Dead never do. A couple of months later, I felt my father’s spirit pass over me and I knew he was gone, though it would be a few hours before I received the official call. My brother and I had refused his care, but he still found space to be present while I had not.

My brother had called, “Joyice, Daddy’s gone.” I replied, “I know, but tell me what happened.” My brother recorded my father’s storytelling the night before. I think he could sense it was the end too. So, he said, “I gotta video for you. It’s literally the last story he told before he died. I’m sending it now.”

November 2017, my father had transitioned from the Land of the Living. I held that foreshadowing I envisioned for a full year until a scary warning that Ecks made, in November 2018, ushered in a powerful premonition that caused a “Ratatouille” moment to unlock memories and scenes. Death was nigh.

Immediately, my first thought was: me or him? Was it me? Was the year-long vision of a death mystery just a note that my end had come? Oh. Em. Gee. Ah, then I realized this scene in my life was freakishly familiar to a scene in mother’s life. I was literally her, but in my own story, and I had remembered that she did not die. Flooded with emotions and epiphanies, the message was now clear and it was mine! I had it, and I knew it. No, my mother did not physically die, but her marriage did.

While I had accepted the message and believed in the vision, I couldn’t see how it would end. I couldn’t worry about that. I was too grateful for simply knowing that it would. That spiritual insight allowed me to prepare for the day I would have to survive, which in-turn became the Day of Death for that old marriage.

2. Two parents responsible for transitioning my soul Earth-side. And, in some uncanny way, made sure I remained in the Earth. Some blend of the echoing of my mother’s voice as I mentally played back her story and the guiding hand of my father’s spirit merged together not just to save my life, but to help me understand how to survive the attack approaching my way.

For my mother, this was sweet and beautiful to me. She’d sacrificed her privacy and expensed my view of my father, for me to have spiritual insights and generational truths. For my father, this was bittersweet and redemptive to me; as if he was remorseful for the threat he’d once been to my mother and was apologizing from the Land of the Ancestors into the Land of the Living just for me.

Enjoy the show, enjoy the story. 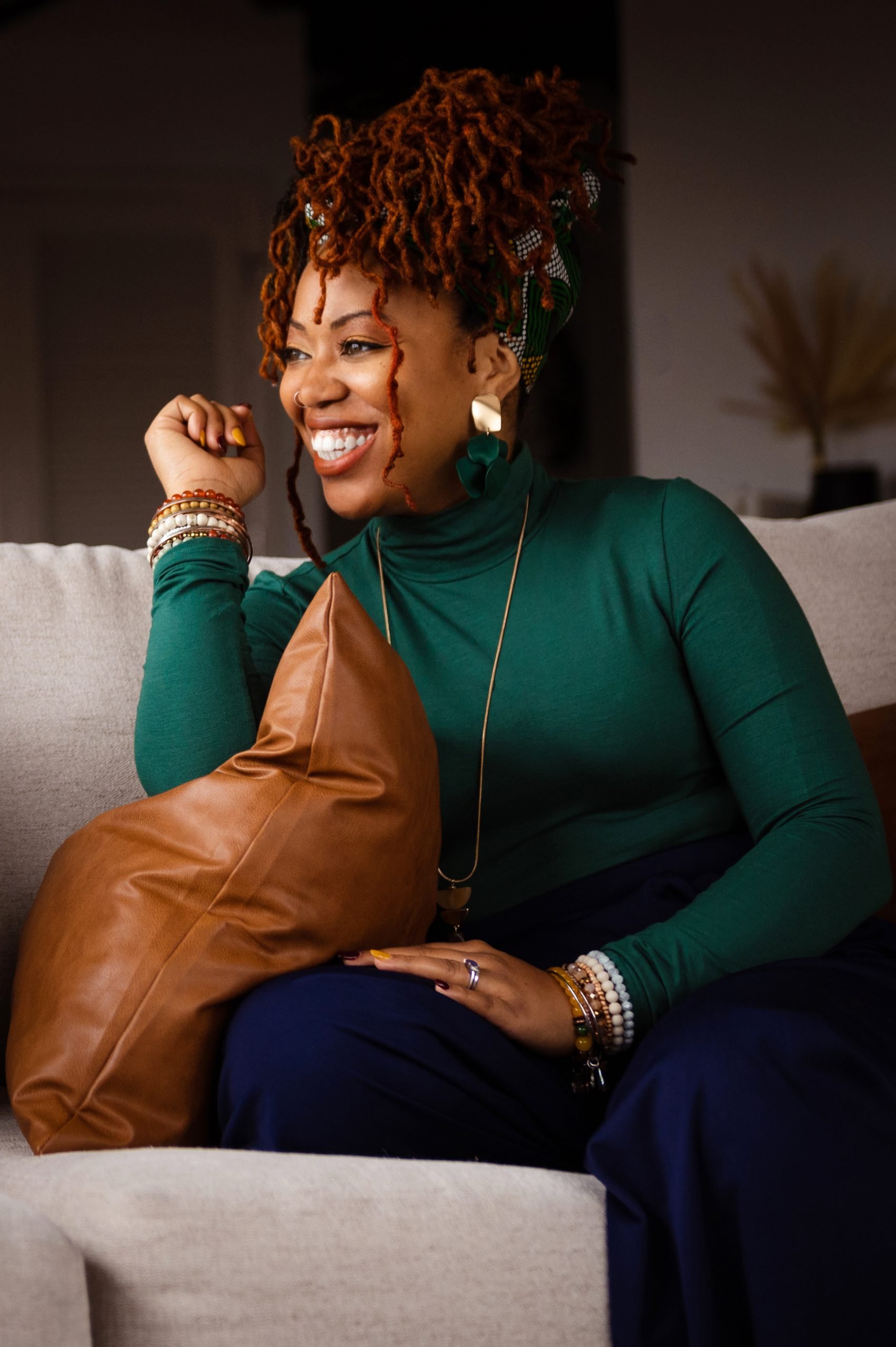 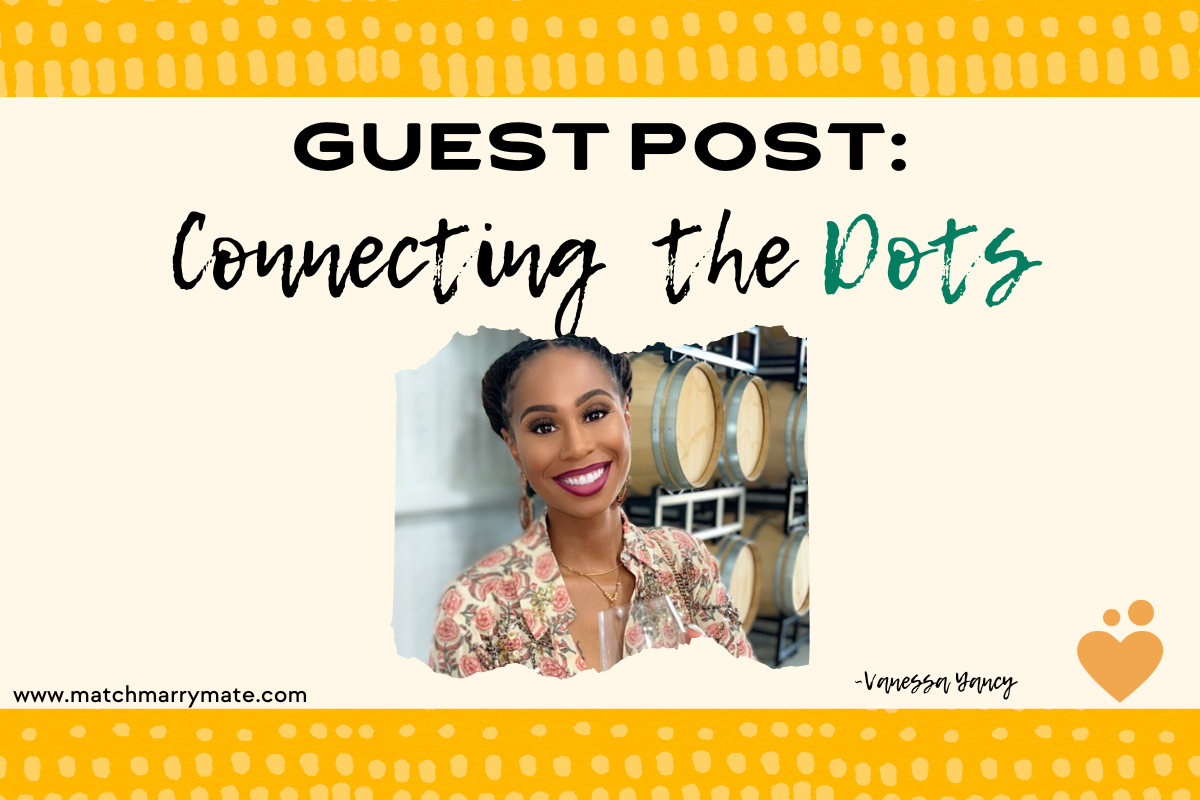 Ladies, you know that foresight that comes with pairing your discernment 🤔 with the data 📝 you’ve collected from a persons previous habits and 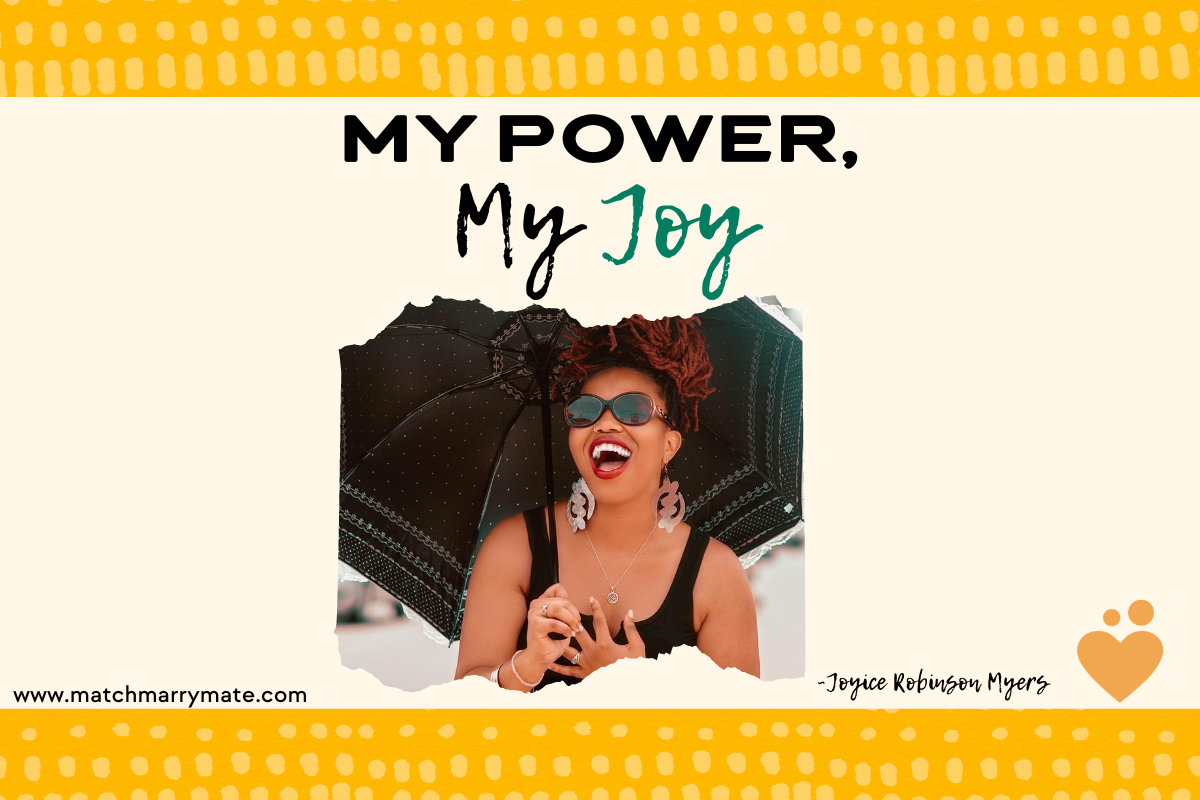 My Power, My Joy

As I sat in self-reflection two months after my birthday, at the height of summer, my 37th sun trip has landed me at the conjunction 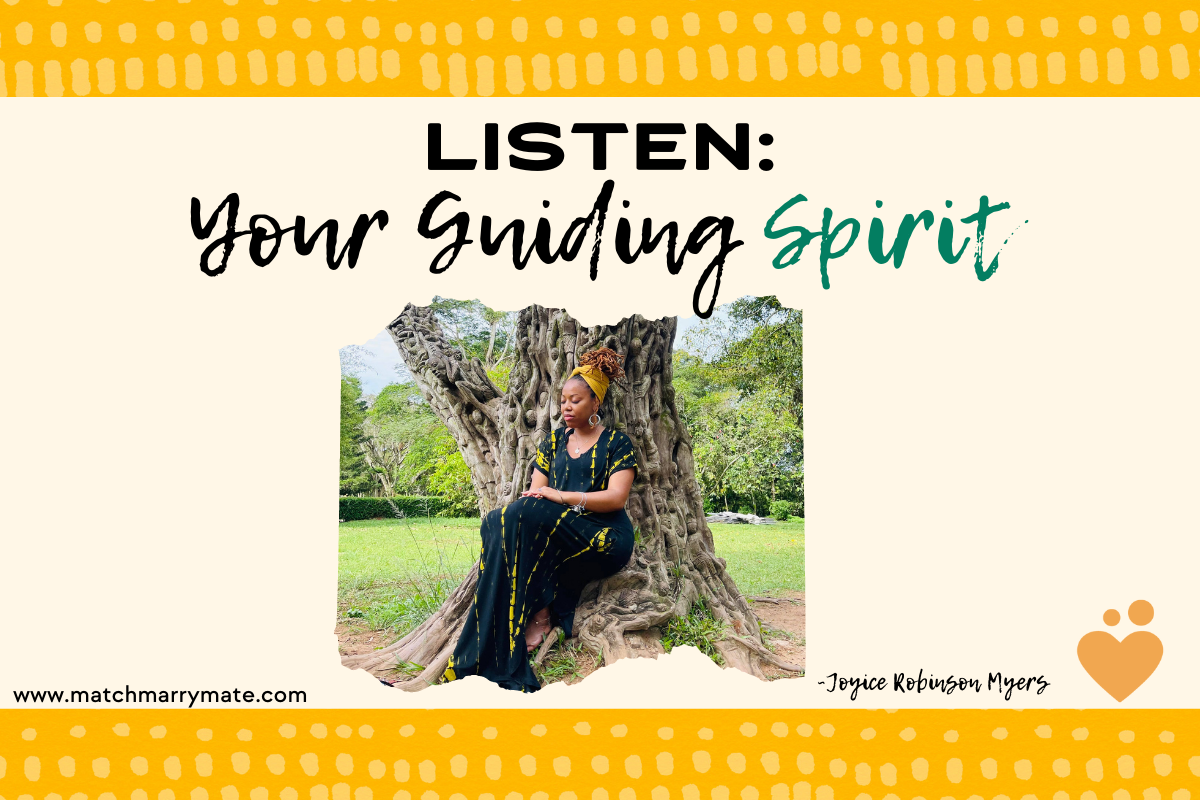 Listen.   That’s the message. While that single word may not mean much to you sitting alone on this screen, it is very much the

Did you know that you can sample Coach Joyice’s coaching style on Mondays and Thursdays @ 7P EDT?